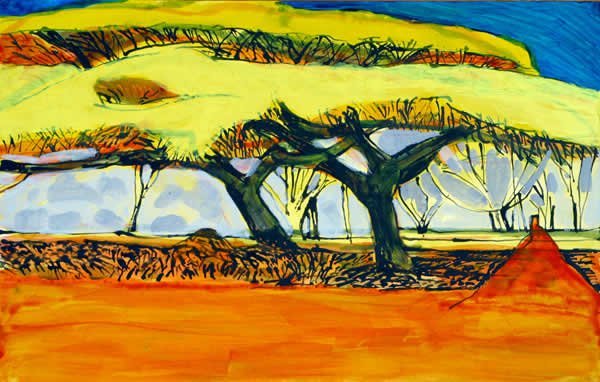 Kate was born in Masvingo (formerly Fort Victoria) in Zimbabwe (then Rhodesia) in 1949. She was raised on a cattle farm in the nearby rural landscape of the Gutu-Chatsworth district. This district was later to become the main source of her inspiration and subject matter.

Kate attended schools in Mvuma and Masvingo before going on to read for a degree in Fine Art at Rhodes University, Grahamstown in South Africa 1968-1971, then lived in Johannesburg, South Africa from 1972-1974 working in the printing industry.

She returned to Rhodesia in 1975 and began a career in art, teaching, intermittently, at various state secondary schools in the capital, Salisbury (now Harare).

In 1984 and l985 Kate attended Harare Polytechnic as a full-time student and obtained a diploma from London City & Guilds and Zimbabwe Higher National diploma in design for print and graphic design respectively.

She instructed in a part-time capacity at the BAT workshop school of the National Gallery of Zimbabwe in 1989, and from 1995 until 2004 lectured at the Harare Polytechnic in design and fine art.

Between 1972 and 1993 Kate worked in textiles and had two solo exhibitions
(Harare) and participated in two group shows. (Harare & South Africa) Kate resumed painting after an almost 20 year break in 1990 until the present day.
Subjects include mostly landscape.